This afternoon I went to Stand Together Brighton & Hove, an act of solidarity with immigrants, Europeans and friends around the world following last week’s referendum result and an opportunity to reflect.  Despite the heavy rain a good few hundred people turned out with their macs and brollies, at the same as time as people across the country joined similar events in London, Bristol, Cardiff, Cambridge, Exeter, Leicester, Liverpool, Manchester and Oxford.

The event was organised very quickly in just a couple of days by a small group of people led by my friend Ali, who explained that she had never done anything like this before, but had seen the other events being organised in different cities and felt strongly that we should have one in Brighton & Hove too.

Caroline Lucas’ husband Richard Savage spoke first, reading a message from Caroline who, he explained, couldn’t be there due to commitments in Westminster.  It was a moving speech, Richard first telling us all how proud he was to be Caroline’s husband and then reading beautifully the points Caroline wished to make.

Through Richard, Caroline celebrated the contributions of people from all over the world to our society and said “You are welcome here”.  She also called for an early general election and the formation of a progressive alliance to unify the country and address the real causes of disenfranchisement in our communities.

The next speaker was Lucy Robinson, a senior lecturer at the University of Sussex, who introduced herself as the Minister for Nagging at the People’s Republic of Brighton and Hove.  I could not hear what Lucy said very well as by this point the rain had become harder and the megaphone was facing away from me.  However during her speech a kind man offered me shelter underneath his umbrella – a gesture that summed up the mood perfectly.

I spoke next; the gist of my speech was as follows:

“I came to Brighton in 2003 for one year, and in 2016 I’m still here: this is the most welcoming, loving and caring city I have ever lived in and I’m proud to call it my home.

Last Friday morning I woke up to the most momentus decision we have made in my lifetime and I’d like to share with you some of the feelings I have been having; I’m sure many of you have had similar ones.

My first feeling was one of disbelief: surely this isn’t actually happening?  Am I dreaming?  Are people on social media having me on?! No. It was real.  As it sunk in I felt like a stranger in my own country. This wasn’t the country I knew and loved. What has happened to my country? Give me back my country!

My next feeling was worry. What does the future hold? What is this country going to become? It dawned on me that those who have come here from the EU and elsewhere to live and play a part in our society might suddenly be at risk of abuse, a risk that sadly, as we all know, has become a reality for so many people.

Finally, anger.  I was angry.  Angry that so many people had been duped by a pack of lies.  Angry that the right-wing media had perpetuated the myths so wilfully and effectively. Angry that people had been taken in by all the bullsh*t and targeted their understandable disillusionment and frustration with the establishement, not at the people who are actually responsible but at the most vulnerable in our society.

So we must first show our friends in this country and overseas, that we stand together with them, that we are welcoming, warm and decent people, and that they are welcome in our community.  I’d like to ask everyone to turn to the person next to them, and give them a hug… [everyone hugged]

Then we must work to understand why people last week voted as they did and build a movement to take our country back from the liars, the cheats and the… [here I paused, forgetting for a moment what terminology I was planning to use next, until someone in the audience helpfully offered ‘scoundrels’ – which I gratefully accepted]… scoundrels who last week took it away from us.  Then we can once again recognise the community that we love. 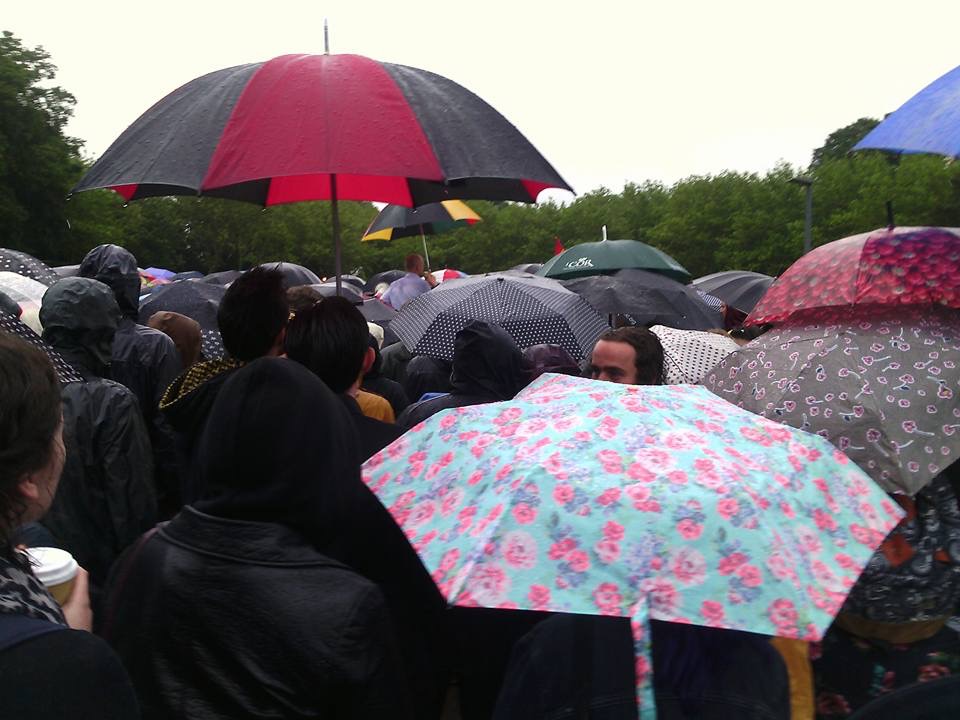 The next speaker was Ben Walters from Brighton Anti-Fascists, who promised not to allow fascist groups any platform in Brighton & Hove, and then came Cllr Phelim MacCafferty, Convenor of the Green Group of Councillors on Brighton & Hove City Council.

Phelim gave a passionate account of the change in the mood from the point of view of an EU citizen (from Ireland) who made Brighton & Hove his home, and gave some examples of the very many benefits that migrants bring to our economy and our community.

Next up was a poet, Michael James Parker, who performed a special poem written for the occasion, which I shall try and find, and post here in due course. It was delivered spectacularly, and was very well received.

Finally Cllr Mike Inkpin-Leissner, a Labour Councillor on Brighton & Hove City Council, told how he had moved here from Germany ten years ago, had been warmly received in the city and had joined the City Council to give something back.  He apologised for being tired, explaining that he (and many other foreign nationals in the UK) had hardly been able to sleep since last Thursday, worried about what might be in store.  Mike explained how a veteran he had met last Friday shed tears when he heard about the referendum result, feeling that everything he had fought for was now at risk. Mike paid tribute to the armed forces in World War 2 who had saved Europe from fascism, and pledged to work with Greens and Tories on the city council to fight fascism in every guise, and fight for Britain’s place in Europe.

The rain continued throughout, and by the end everyone was thoroughly soaked but still they stayed and listened, and even joined in a song which Michael James Parker sang to round off the event.  It was a song about Jo Cox, and how even though she is no longer with us, she is with us.

RIP Jo Cox, thank you Brighton & Hove, and solidarity with our friends in Europe and around the world.