Last December I got a call from a friend. “Tom, we’ve got a problem. The rig is due at Barton Moss first thing Wednesday morning and we need to do something about it.”

The ‘rig’ is a drilling rig, used to drill for shale gas. If enough shale gas is found, a ‘fracking’ operation kicks off and we say bye bye to another piece of our green and pleasant land… not to mention the health of families and livestock in the area, the increased methane emissions (the most dangerous for global warming potential), the millions of gallons of water used in the process, the hundreds of lorries a day required to deliver it, and the damage caused to the local community and the environment in the process. 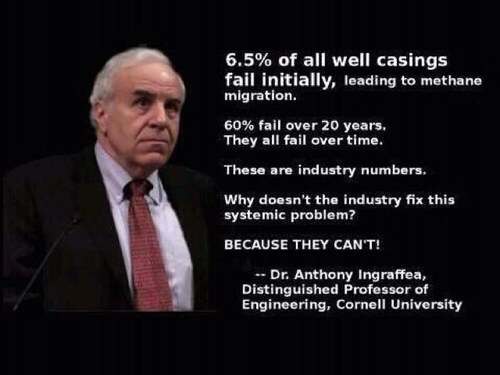 As long as the rig stays out of the compound, there can be no fracking. While there is no fracking, life is better.

I had a long think. What could I do? What should I do? It was clear that we can’t just roll over and let it all happen. There was no time though – Wednesday was just a day or two away. It was clearly time to think the unthinkable.

So I hatched a plan. Late on Tuesday night I drove The Big Orange up from Brighton to Barton Moss, near Manchester. Waiting for me was a group of highly trained professionals ready to use the bus for a striking display of resistance. We met for a cup of tea, went through the plan, and got to work. A quick recce of the site entrance showed that the coast was clear, so in went the coach, and the brave souls who had chosen to attach themselves to it got in place.

Three people had attached themselves to various parts of the inside – front door, back door and steering wheel, in a way that meant the coach could not be entered, moved or driven. One person was attached by a D lock to the underside of the coach, and another was on the roof. 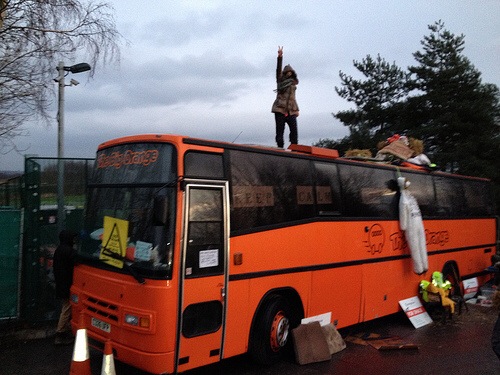 For six hours the bus stayed in place at the front of the gate, stopping the rig from getting through, while security guards and Police tried to figure out what to do about it. Despite the chilly wintry morning, the atmosphere was full of warmth. People were teeming round the coach, offering blankets, hot soup and encouragement to those attached to the vehicle. Unfortunately I had to head back south as I was due in court in Hastings the next day, so I missed most of it.

Judging by the photos on the internet later, it seemed like the main method employed by the Police to deal with the situation was old fashioned brute force. 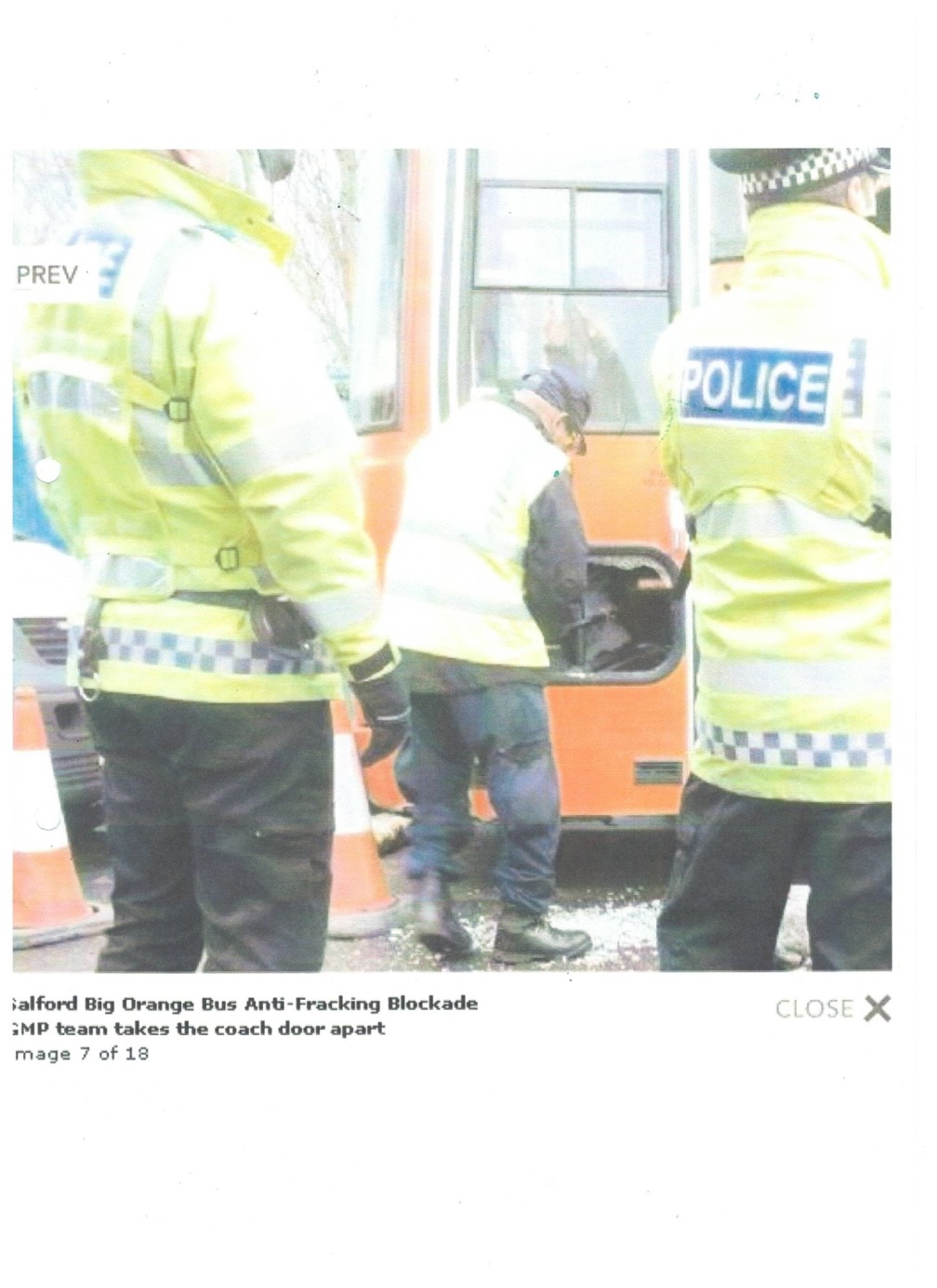 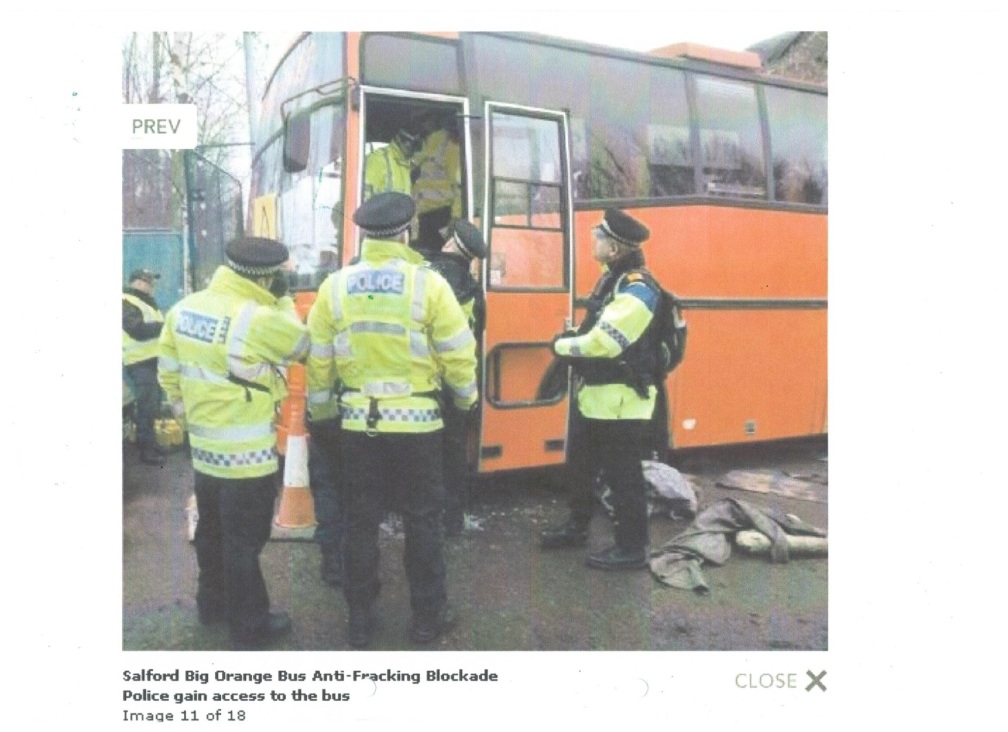 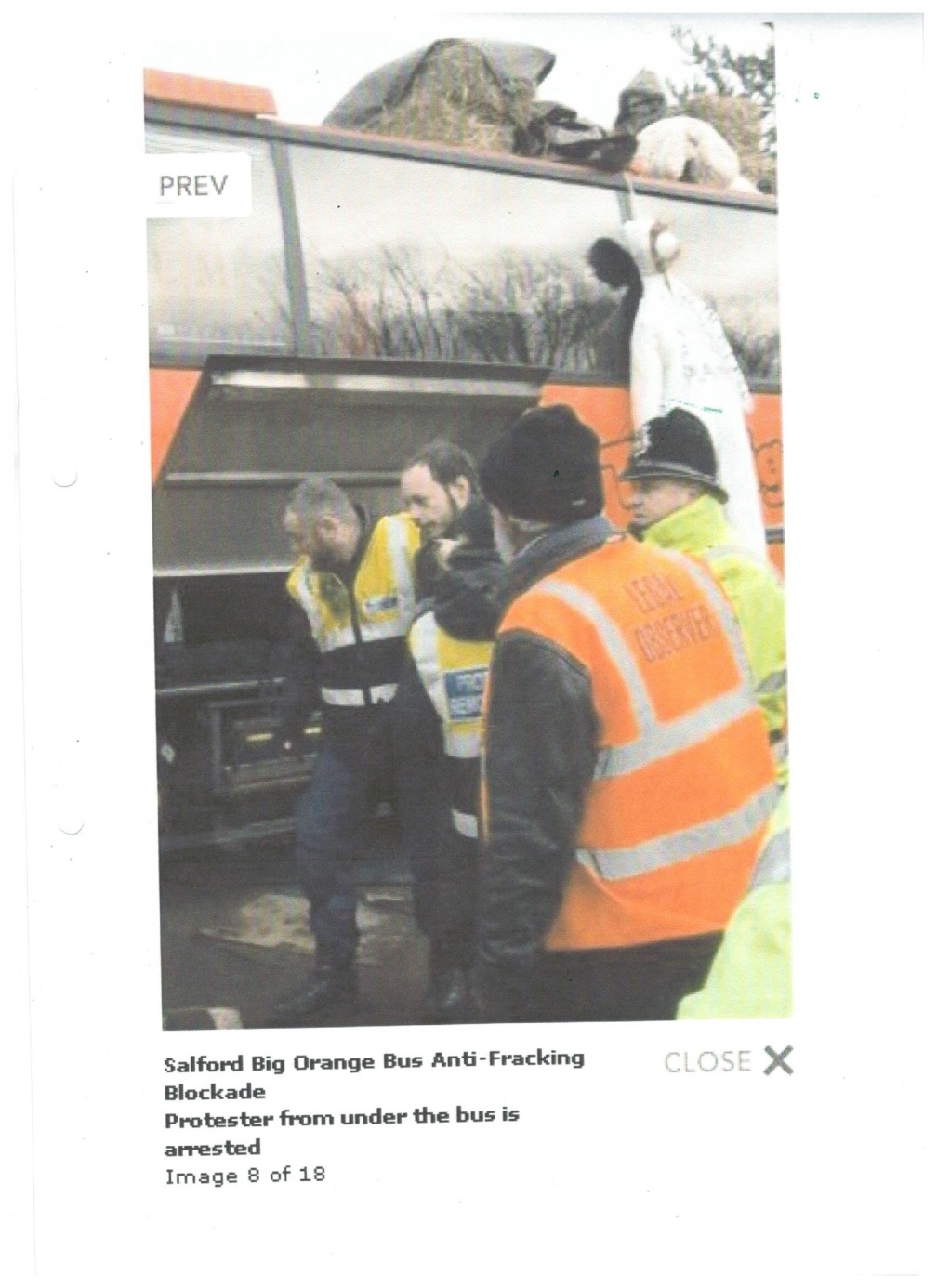 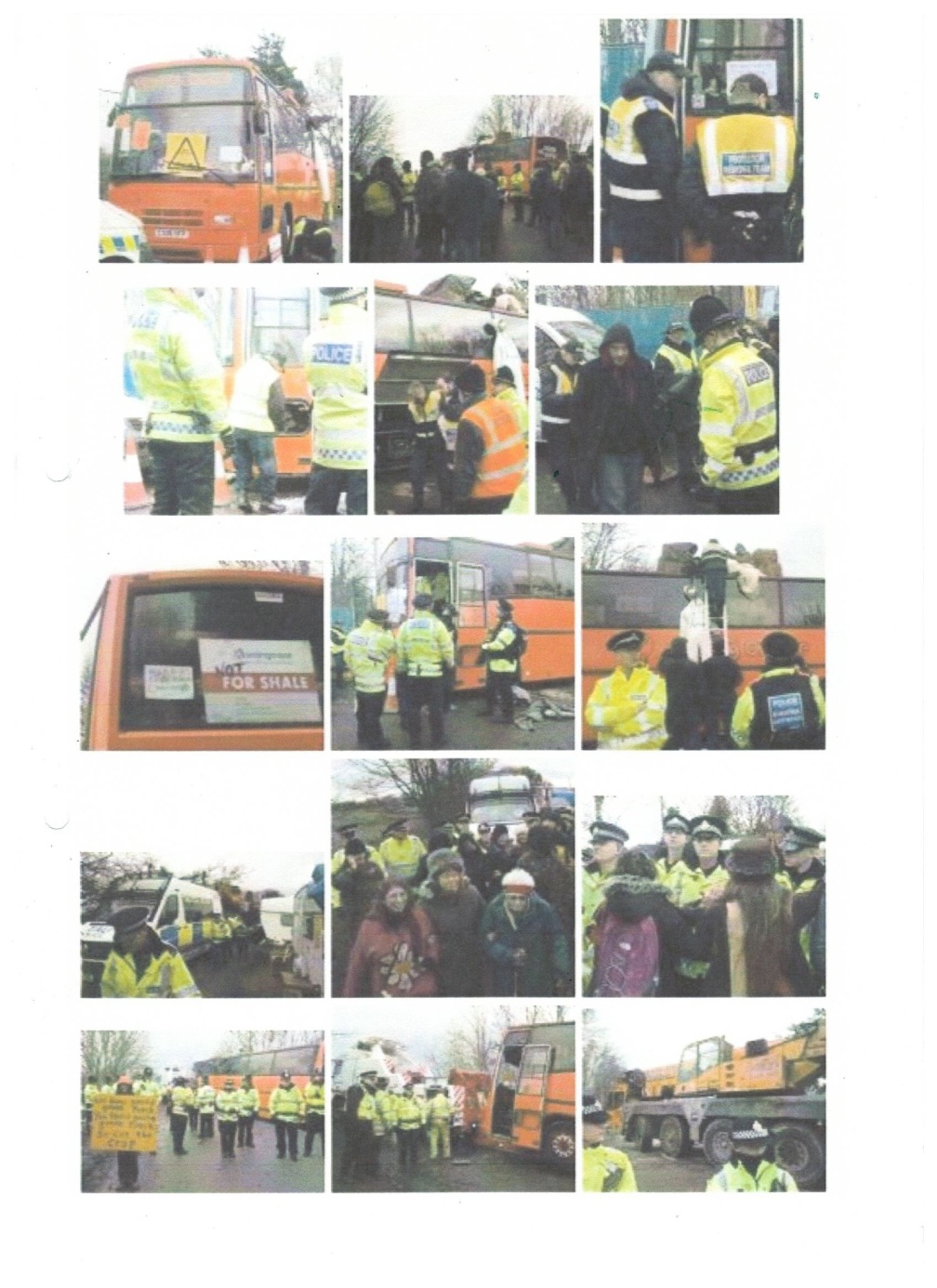 After smashing a window, forcing entry, arresting those on the bus and towing it away, the Police then asked me to attend an interview at the local Police station to answer questions, amongst other things, as to why the bus was in such a poor condition.

I went back up to Manchester, answered their questions, and a couple of months later received a court summons to answer charges of “Obstruction of the Highway”, and “Driving a vehicle in a dangerous condition”

“What a cheek!” I thought. Not only do they damage the vehicle (the repair bill was over £3000 and needless to say they haven’t volunteered to contribute) they then pretend that much of the damage was already there. Things they quoted were the front door not working due to disconnected air pipes, a plastic seatbelt cover missing (seatbelt still working though), two seats dislodged and loose, and a luggage flap so damaged it would be, in the words of the Police officer I spoke to, “liable to fly open any minute”. Strange then that I’d spent six hours driving from Brighton to Manchester and it hadn’t done so.

The other charge, of obstruction of the highway, was just as ludicrous. Everyone knew it was not a ‘highway’ but actually designated as a public footpath. In fact a judge had ruled on the matter only two weeks earlier: 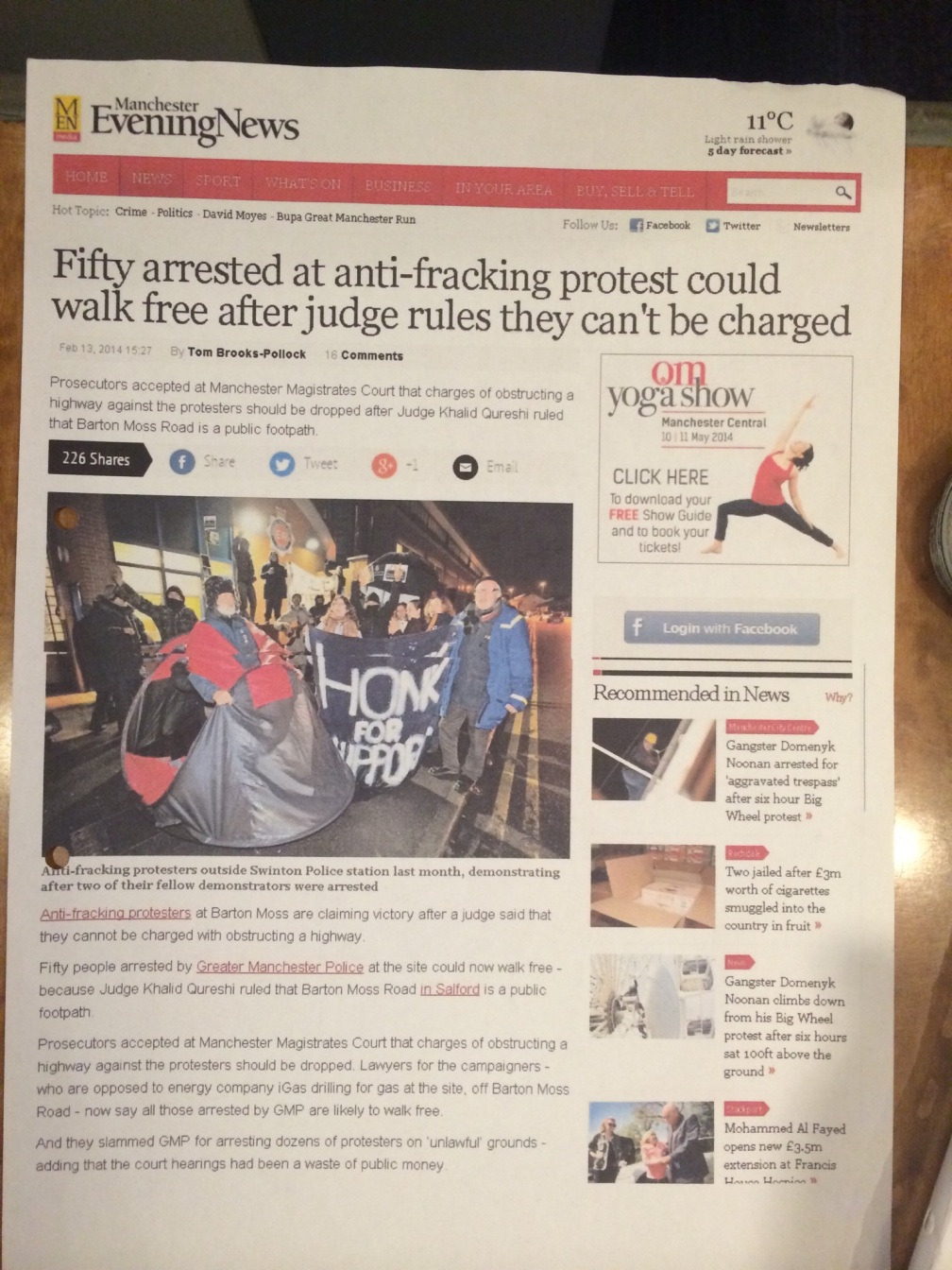 Someone had even spotted the Police taking away the footpath sign in an attempt to hoodwink everyone: 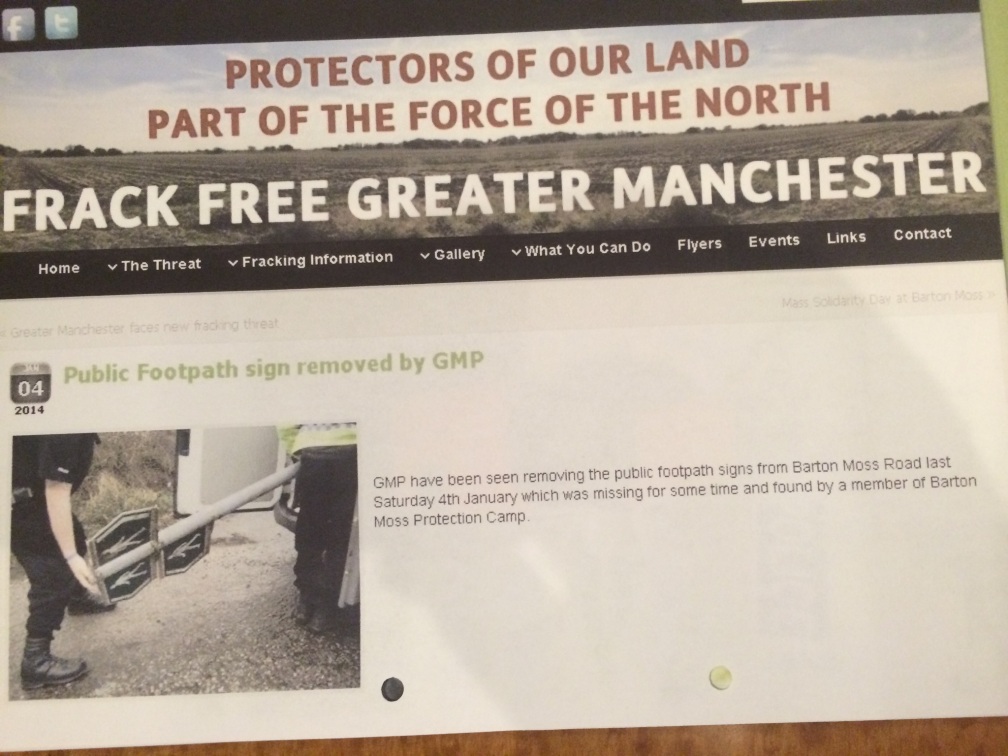 Now, nine months after the event, I’m standing outside Manchester City Magistrates Court about to go in. The Police didn’t fool the public, let’s hope they don’t fool the magistrate either.